2 contracts for the delivery of electric propulsion solutions 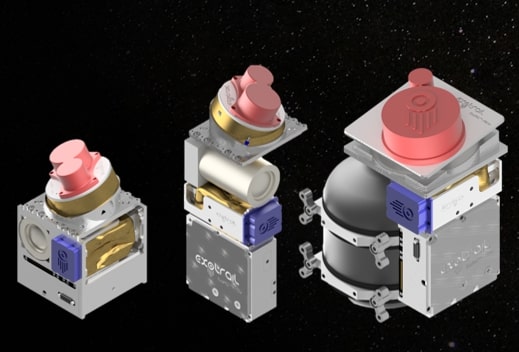 ESA has signed two contracts with Exotrail under which the company will build and deliver engineering, qualification, and flight models of its ExoMG™ - nano and ExoMG™ - micro electric propulsion systems. These contracts will allow Exotrail to develop new features on both products ready to be demonstrated in space.

The first contract follows a General Support Technology Programme (GSTP) under which Exotrail has been supported by CNES. It will accelerate the qualification and flight demonstration of ExoMG™ - micro. The other contract follows a standard competitive procurement process from the European Space Agency through the EXPRO+ mechanism, under which Exotrail has been chosen to deliver a propulsion system in 2021 followed by a test campaign at ESTEC.

With this new contract award, Exotrail confirms that its ExoMG™ product portfolio meets both commercial customer needs, such as Eutelsat and AAC Clyde Space, as well as institutional customers & agency’s requirements, namely CNES and ESA, for electric propulsion systems.

“Within the last six months, Exotrail has signed a string of contracts with commercial and institutional customers, both in Europe and in Asia. We are thrilled to announce these two new contracts with ESA. It fully confirms our ExoMG™ product strategy and the growing interest of the smallsat market for the solutions we are building to support smallsat constellation deployment and operation. We are super excited to work with ESA!” commented David HENRI, Cofounder & CEO of Exotrail, from the Space Forum in Luxembourg.

Exotrail is a company developing solutions for on-orbit transportation, including electric propulsion and mission optimisation and operation solutions for small satellites. Exotrail’s mission is to deliver agility to the space industry to foster an environment of new services in Earth observation, telecommunication and science. The company employs 30 people in Massy and Toulouse (France) and has raised more than 17M€ to date.